You can click on any of the images to enlarge them.

R.C. Pillar & Sons Ltd was established by Richard Pillar in 1870. He lived at Castle House in South Town, and the company operated out of Bayards Cove, which consisted of a small joinery workshop and masonry store. 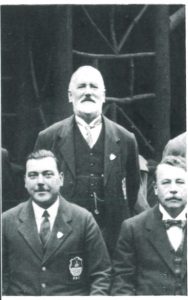 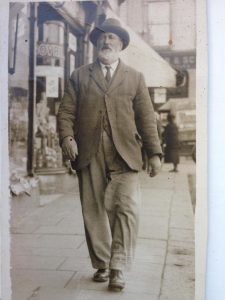 The entrance to the yard at Bayards Cove was through the old castle. Once inside, there was a concrete block maker and a large tank for storing lump lime. This could be boiled with ox hair to form lime mortar. A small lean-to building served as a carpenter’s workshop.

His son, Reginald Charles took over the running of the company in 1936. He served his apprenticeship under his father and was a qualified stonemason, who was highly respected by his men.

Reginald was very involved with the local community and was the president of the Dartmouth rotary club. He was a respected warden at both St. Barnabas and St. Petrox church and he was also the founder member of the Dartmouth league of friends in 1975. The Reginald Pillar ward at Dartmouth hospital was named after him in recognition of his services to the community. Sadly the hospital was to close in 2018. 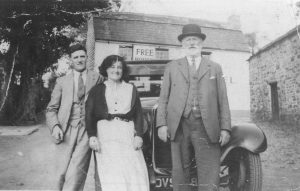 Reginald was an astute businessman and is remembered in particular as someone who could quickly reassure any customer who became anxious whilst alterations were being carried out on their home.

From its early days the company had a family atmosphere and after the war all the young men who had left to fight, returned to the work that they had carried out previously. Most of the work force was time served and for instance, a carpenter had to serve a five year apprenticeship and then a further six months, improving, before becoming fully qualified. The outbreak of war in 1939 provided considerable work for the company to carry out as the town suffered extensive damage from the German bombing raids. This led to the company rebuilding the Co-op, Rundles, Eastmans, the Mildland bank along with eight house on the Milton Lane Estate to name but a few. The workman soon learnt to be flexible and versatile and were expected to undertake a variety of work. They renewed and maintained some of the towns drains, cleaned out septic tanks and swept chimneys.

Some of the manhole covers can still be seen today… 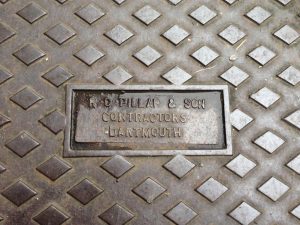 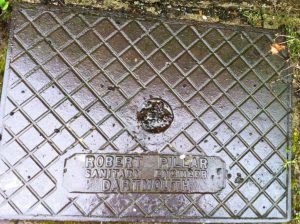 In the 1940’s and 1950’s the company was also responsible for a number of contracts that have now been taken over by the council and other public bodies. In addition general repair work and maintenance was carried out at Dartmouth Castle along with repairing stone walls and guttering before it was eventually taken over by English Heritage.

In 1949 R.C. Pillar & Sons Ltd moved their workshop to a building in the centre of town called The Palladium, which was an old electric theatre in Anzac Street. The old building was transformed into a joiners shop, mason store and paint department. All the building materials were stored there under the close supervision of the joiner, Ron Dodd.

In 1961 Reginald Christopher Pillar ‘Chris’,  Reginald’s youngest son became the third generation of the family to manage the company. He attended Torquay Technical college in 1956 and obtained his diploma in Construction studies. Chris was then fortunate to secure a position with a well respected local company – Staverton Builders, working as a site engineer. He worked on some large projects throughout the South West with them and formed some very special relationships with the people he worked with. Chris was raised in the family home at Redholm in Mount Boone which was also the company office at the time. His mother Ivy was the bookkeeper and the employee’s would collect their wages from Redholm each week. 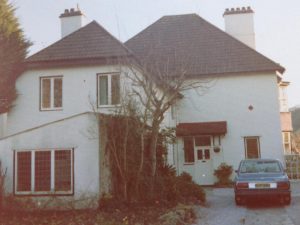 When Chris joined the company it coincided with the offices moving from Redholm to its current position in Anzac street. Chris supervised the building of the new office as one of his first projects.

The Palladium as joinery’s workshop, renovations being carried out and new town house Elsley Cottage… 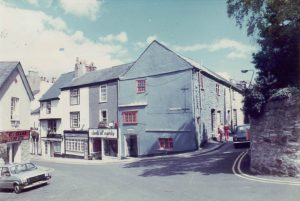 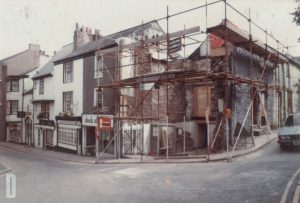 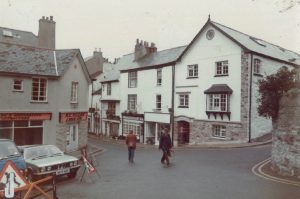 Chris Pillar, the 3rd generation of the family to run the company and Company Offices in Anzac Street…. 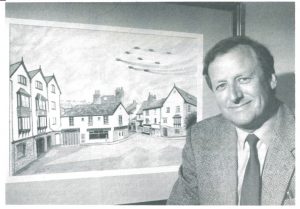 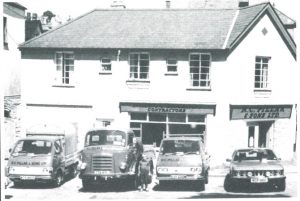 Chris was also responsible for the expansion of the company into haulage and plant hire. In the late 1960’s the companies lorries were involved in the construction of the main A38 bypass and the ‘new’ road into Dartmouth. 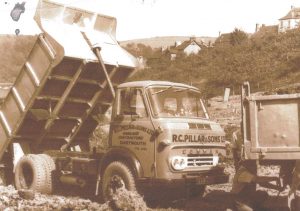 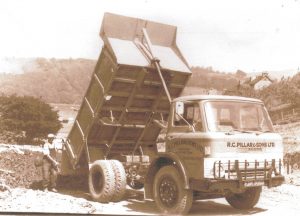 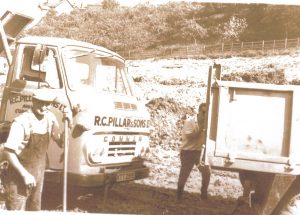 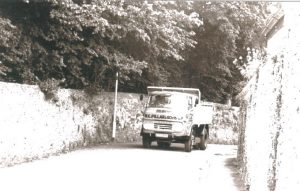 In 1986 The Palladium was becoming too small and restrictive. The joinery’s shop moved up to the Townstall Industrial Estate, and is well equipped with the necessary wood working machines to carry out most aspects of joinery. The old workshop, was then transformed into a number of retail outlets, forming what is now know as The Palladium Shopping Arcade. During the refurbishment works by the company the original silver screen from the eclectic cinema was exposed. 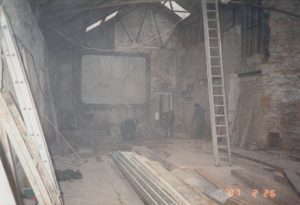 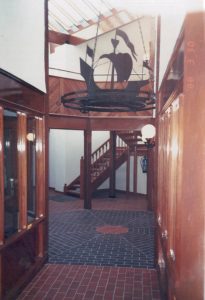 Chris retired in 2000 and his eldest son Jason Christopher, became the Managing Director after joining the family business in 1995. Jason always took great interested in the business whilst growing up, helping out on the sites as much as possible during the school holidays.

Jason and Chris were very close and embarked on what was called The Great Commer Hunt in 2001. The objective for Jason was to find a suitable Commer TS3 Tipper as close as possible to his fathers lorry as seen in the above photographs, and restore it in the original company colour scheme as instigated by his father in the 1960’s. Eventually a suitable lorry was located in Cornwall in October 2016. Chris and Jason spent many hours together to enable them to get the lorry as close as possible to the original. The restoration work was completed in July 2018 just months before Chris sadly passed away the following year. 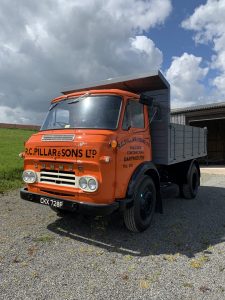 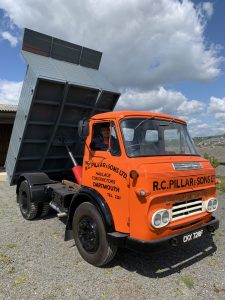 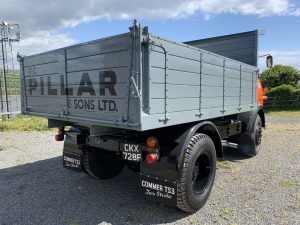 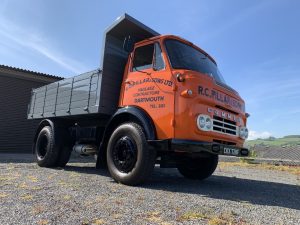 Jason followed in his father footsteps and attended Torquay South Devon Technical College, where he achieved a diploma in building studies. Jason then moved onto Greenwich University where he obtained a degree with honours in Construction management.  He served his apprenticeship with a national building company working on projects in Plymouth, Exeter and South Wales as Site Engineer and Site Manager. 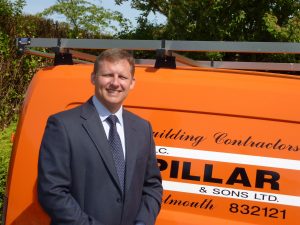 Over the past decade the company has been fortunate to have been involved in carrying out significant renovation works to a number of prestigious properties in Dartmouth, Kingswear, and the South Hams.

The company has also undertaken Design and Build contracts, for example in Torquay were a large commercial office building was completed for Thomas Westcott Chartered Accounts. The project was completed ahead of the contract programme and within the clients budget.

Although Jason and his staff relish the challenge of the large, complex projects, the company is keen to carry out minor repairs and maintenance work for its regular local customers.

Peter Caldwell is the company bookkeeper and secretary, based in our offices at Anzac Street. Peter previously ran his own bookkeeping practice and joined the company in 2014. Peter is always happy to take your enquires and offer his advice where he can.

Mike Franks is the company Quantity Surveyor. Mike previously worked for the company with Chris in the early 1980’s before leaving to carry out surveying work for Torbay Borough Council. Mike rejoined the company in 2001 and has a wealth of knowledge and experience in his field.

Above all the firm of R.C. Pillar & Sons Ltd is a family business, one which strives to produce the highest standards of craftsmanship for their customers, of which both can be proud. 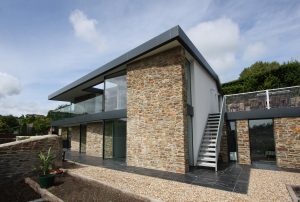 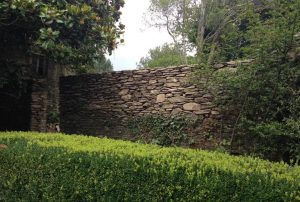 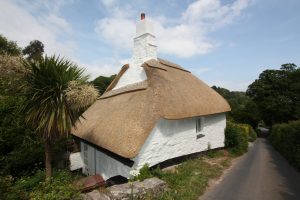